You are here: Home / Owen, Bettie 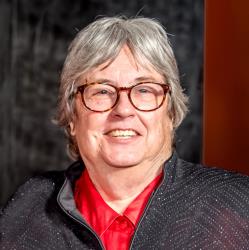 From 1999-2017, I worked in many capacities for Wolfe Video, with my final title being Vice President of Digital Production. At Wolfe, I learned a great deal about the business of distributing and marketing independent LGBTQ + films. I had the fun of working with directors, designers, publicists, festival planners and so many more during that time. It was a privilege to help guide the creative works of LGBTQ filmmakers to be seen by as many people as possible.

I retired in late 2017, but remain a special consultant for Wolfe Video.

I have been a member of the Rainbow Chamber since 2014, and  have served on the board since 2017. Besides staffing many events, I have served as a member of our marketing committee and editor of our e-newsletter. As of February, 2020, I am honored to have been chosen as co-president of out Chamber, along with Hank Dean. I am excited by that challenge.